4′33″ is arguably Cage’s most famous piece.
It has been called avant garde; art.
It has also been called gimmickry; a joke.
But it is very much a piece of music.

With the exception of opening and closing the lid.
And turning the sheet music pages.
As the piece progressed.

Here is also a performed version of 4’33”:
https://www.youtube.com/watch?v=HypmW4Yd7SY

And here is another.
With different musicians and instruments:
https://www.youtube.com/watch?v=Mr9YnBaZBgc

If you have time.
Spend a few moments watching these.
And have a glance at Cage's original score.
It is at the very foot of this page.

Yes, a serious piece of work.
But is it music?
That debate continues to rage.

Or is the music the sound-space?
Filled with ‘ambient’ sound?
- Is Cage simply ‘revealing’ the ambient sound?
- Is Cage allowing natural sound to ‘perform’?
- Does this mean ‘chance’ is the composer?

For conventional written music.
Each piece and performance is planned.
Intended, organised sound.
Such planned music combines with the ambience.
Which is present during any performance.
This planned sound, plus ambient sound.
Is the total sound.
Which therefore makes each piece unique.

In 4’33”, Cage doesn't intend us to hear silence.
He wants us to LISTEN.
To listen to the revealed, ambient sound.
Closer to nature.
Indeterminacy.

‍“The piece is not actually silent. It is full of sound...which I did not think of beforehand, which I hear for the first time the same time others hear”.
‍(Cage, 1954, Letter to Helen Wolffe)

Cage believes every sound and noise is valid.
As valid as a conventional ‘musical' note.
As performed from a conventional music instrument.
For Cage, there is no hierarchy.
No sound, or noise.
Whether planned or unplanned.
Is more ‘musical’.
Or more ‘important’.
Than any other.
‍ 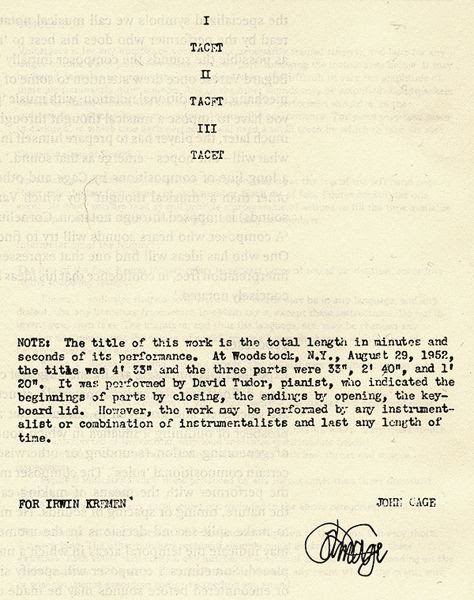